From the for sale ad when I bought him: 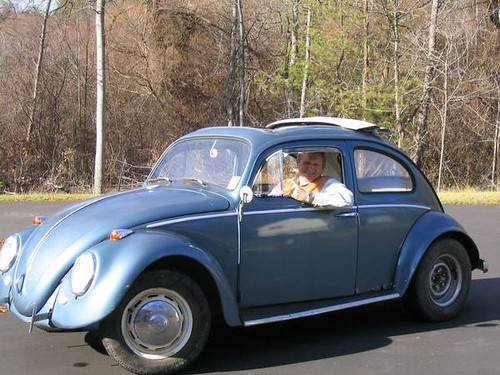 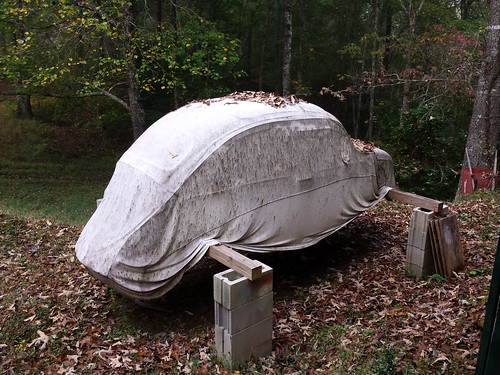 Alright, I'm going to catch you up on the 4 years that passed in the interim in a single post. Fasten your seatbelts, get your tissues handy and hold on!

I found the craigslist ad, which stated:

overall in good condition, very sound little classic. I drive it to work on occassion. $5000 or
best offer.

Now, I had happened to have sold a website I owned and had been saving the money, which was burning a hole in my pocket, with the goal of buying a running and driving VW, my dream car since I was a child. and this ad stated that it ran great and he drove it to work! That's the very definition of running and driving.

I wrote the seller 5 or 6 times over the course of the next week because that needed to be my car. By the end of the week, I was getting pretty worried that it was gone but he finally wrote me back!

Me: If the car is as good as stated, I would like to buy it for your asking price. Could I use your tag to get it back home(a 2 hour drive)?

Him: Well, I don't know if I'd drive it that far. It's been sitting a while and I haven't started it in a bit.

Me: I'd still like to come look at it.

So, in spite of the fact that we're already dealing with an ad that doesn't necessarily adhere to a truthful story, I loaded up the family and drove to Asheville.

Once there, we went into his garage. I saw plenty of rust but this guy had clearly put A LOT of money into it trying to make it a driver. I mean every mechanical system aside from the longblock had been replaced or rebuilt. Looking back on it now, I know that he was chasing problems trying to make his dream car drivable and he finally gave up. At the time, I just thought he was balls out good to his ride.

We did get the engine to turn over but it had sat so long, the gas was almost turpentine. The rust was a much larger issue than I initially thought.

Me: I've got to be honest with you, I just don't think I have the money to get this to where it needs to be.

Him: I'll come down on the price.

Me: Well, I don't want to offend you with an offer, I think you're probably better off finding someone else. This is a desirable vehicle and you're going to find a lot of people that want it.

Him: Give me an offer. Any offer.

Him: I'll tow it to your house immediately.

And so ends the skit of Schwim buying a car.

So I got Zippy home and figured with some fresh gas, I'd simply drive Zippy until I died and then I would be buried in him.

As you can see in the after pic, this is not how it went down. Once I realized how badly I had misjudged the situation, my goal became fixing what was wrong without taking it apart or off the road. Again, you can see how poorly that worked out.

The odds were greatly stacked against me. The seats wanted to fall through the floor, the shifter would detach from the hockey stick, leaving you with no gears. The ground strap for the battery didn't have enough real metal at the floorpan causing poor starting, etc., etc. We could go on but you've seen the pic and know how that effort ended.

I did, however, think that I could get some floorpans in it, fix the transaxle issue and get it back together quickly. I separated the body and pan and did some welding: 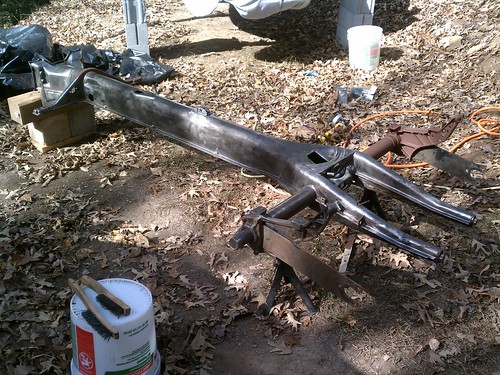 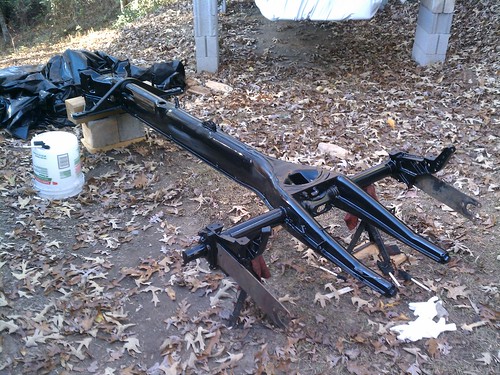 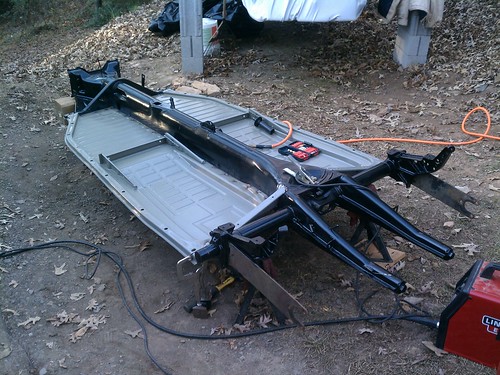 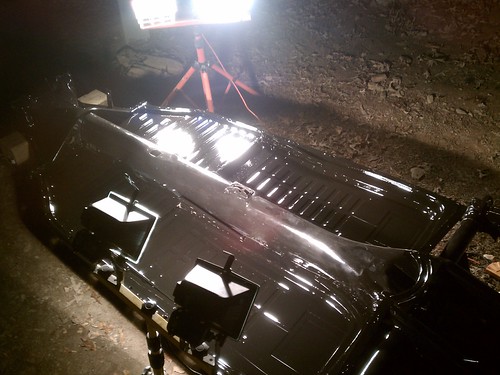 But during this period, I fell off the wagon. I began chasing rust on the body. 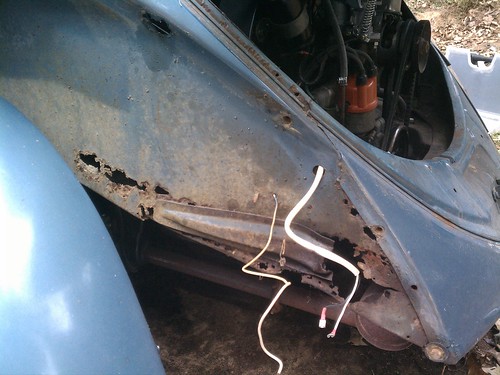 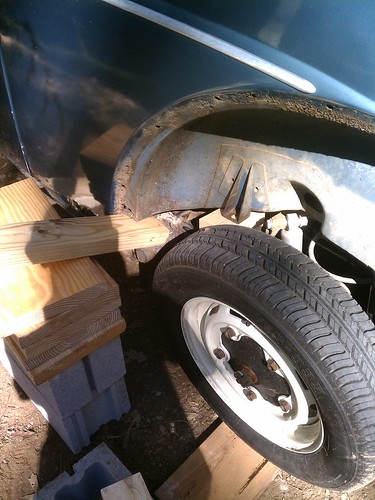 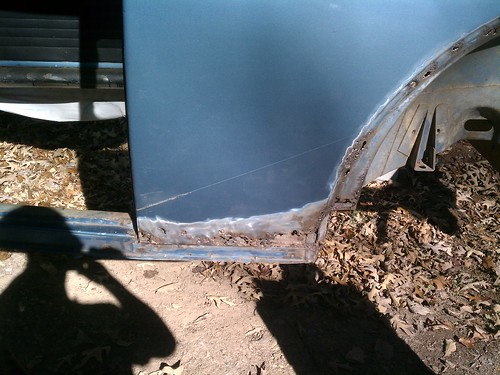 There were many more spots, like the bottoms of the heater channels, front pillars, wheel arches, spare pocket, etc. I can't seem to find those pics, however.

And I began cutting. I purchased used stuff on The Samba that was in nearly as bad of shape as what I was replacing, I disassembled parts until there was no more to disassemble and then ..... nothing. Life happened, I got busy doing life and Zippy began returning to the elements.

It took about 4 years for the guilt to grow to the point that I felt I had to either sell Zippy or start working to put him back together. The points for selling Zippy were many. I didn't have the money, knowledge or space to work on him. It's not easy building a car in a yard that slopes. The reason behind keeping Zippy was one. I love Zippy. He's my dream car.

First, I cleared off the lower half so I could see it: 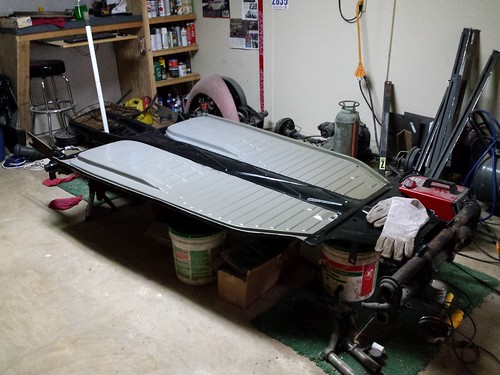 Now's probably a good time to point out that Zippy is in my basement. When it's back together, I will literally have to take the exterior wall apart to get it out. I've not told my wife that part yet.

Then I started grabbing parts that have been sitting under my porch for 4 years, taking them apart and putting them back together in a bit better condition.

And I have got probably 40 hours of sanding JB Weld off of this steering wheel that I bought on The Samba for very little.

Which brings us to today. Today, I sanded on the wheel for a couple more hours, put another coat of JB Weld on and started working on getting the stock rear spring plates off.

JB super weld for a steering wheel?
Does it fill in the cracks and then you sand it smooth and you can paint it?

Just curious as I never thought about using it on a steering wheel.

65VW wrote: JB super weld for a steering wheel?
Does it fill in the cracks and then you sand it smooth and you can paint it?

The wheel had obviously spent a looot of time in the elements. When I got it, it had thousands of cracks varying in severity between paint/finish spiderwebbing to completely down to the steel frame.

I wanted something that would bond well enough to keep the steering wheel material stable and solid where the cracks ran entirely through the material. I've worked with JB Weld a lot in in the past and the few times I had to sand it, it wasn't too bad.

I took a dremel and opened up the cracks so I wouldn't be trying to push the material into hairline openings.

At first, I was only pushing it into the worst with the intention of using something like glazing putty for the minor stuff. After a while though, I found it worked great for all of the different types. I went from mixing up and pushing into certain cracks to mixing larger batches, and then applying some, heating it a bit with a heat gun and then pushing it into the wheel with my fingers. After drying for a day or longer, I would sand the putty off until all that remained was the crack filling. The putty is softer than the wheel material so sanding results in a perfectly smooth wheel surface.

The only thing I haven't finished yet are the wings of the wheel as I have to be a lot more careful so I don't over apply or sand the details off. I'm working up very small batches, applying and heating then wiping clean with shop rags. So far, it's been doing well to fill the cracks in that area without messing up the surrounding material but it makes for much slower progress.

Some pics(If you click on that last pic, you can see the severity of the webbing as well as the quality of the fill):

by Maddel » July 13th, 2017, 1:05 am
Looks like a very time-consumig and dusty task... But the result is quite impressive.
Time will tell if the temperature extremes inside the car will have any impact on the repair.

Now my sound deadening method is more apt to be stinky, but that's quite a ways down the road

Have you had time to do any work on Zippy lately?

And because of all that, the basement is just an absolute mess. It's hard to even pass through, productivity is out of the question until I clean the mess up!

A Classic with VW sounds.

Users browsing this forum: No registered users and 2 guests